How the Chevy Curved LED Light Bar Unleashes Your Spirit

The Chevy Silverado special editions are as rugged as rugged gets. Today standard edition Silverados hold their own in terms of their rough and manly exterior, and has vastly improved in aesthetics and engine performance. But for the beefiest and most testosterone-injected pick-up truck, it HAS to be a special edition Chevrolet Silverado. It doesn't matter if its the Redline, Custom Sport, or Special Ops version; its body size, special head lights, and driving performance is certainly a major step up. However, the Silverado can ALWAYS get more rugged. How? With a 50" curved 288W LED light bar. 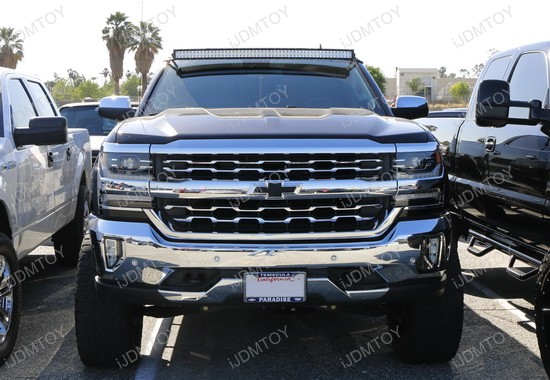 This particular LED light bar outstretches at a whopping 50 inches with a super powerful output of 288W. The double row LED light bar is powered by 96 LED diodes, each rated at 3W. It boasts both a flood pattern and a spot beam pattern to shine its light wider and further than most other LED light bars. Lastly, this 50" LED light bar is curved to contour and fit onto the rooftop of the Chevy Silverado or GMC Sierra. 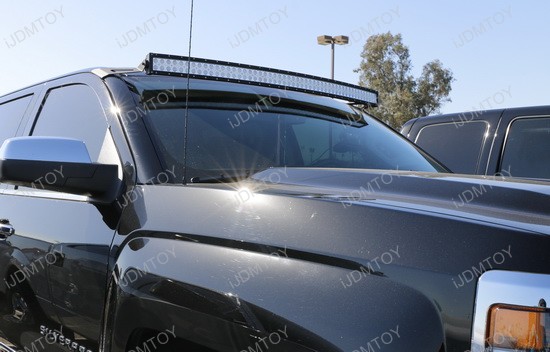 Together with a solidly built pair of roof top metal mounting support brackets, built specially for a 2014 or later Chevrolet/GMC truck, the curved 50" 288W LED light bar is a perfect fit above the Chevy Silverado's front windshield. Because the LED light bar is curved, it is now outstretched to match the length of the Silverado truck's roof top. When paired with the exclusively designed light bar mounting brackets, the curved double row LED light bar sets itself perfectly on top. The support brackets are shaped along the edges and are crafted long enough so that the LED lightbar set in between is tightly secured and does not move. Imagine this Chevy Silverado without its LED light bar. It looks alright on its own right? How much more powerful does it look with the clean looking, but super rugged double-row curved LED light bar on top? I know if it were me I'd be putting the pedal to the metal in it and plowing through the countryside. I'd throw caution to the wind and release the animal spirit inside me knowing I can see everything in front of me. I'd love to experience this Silverado along with other offroad LED truck lighting on it. 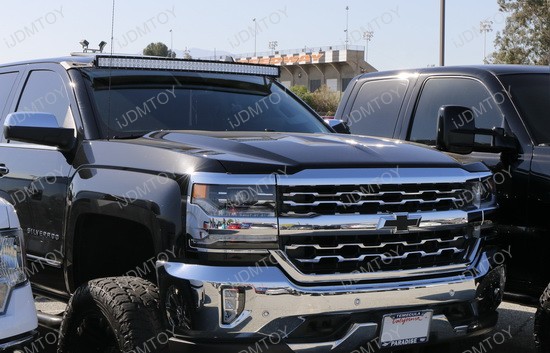